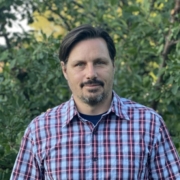 My name is Corey Macaluso, and I am studying at the Christian Leaders Institute to become a Minister of the Word (Learn more about online Bible courses, Click Here). Married for 12 years to my loving wife Christina, we live in Kennewick, WA. We have a daughter Grace who lives with her husband in western Washington. We are raising our two young boys, Jaron, 14, and Grant, 11. Family time is always the highlight of our week. We love to swim, watch movies, and play games.

After graduating high school in New Hampshire, I set off on a great adventure in the United States Marine Corps. I learned honor, integrity, and service to others. After four years, I went on to become a public servant.

I started going to church with my wife when we were dating. At first, I only attended for her with no interest. One night, the pastor preached a sermon on an issue I was struggling with. Then, the very next week it happened again. This time, I felt like Pastor was speaking directly to me. I started asking a lot of questions. At that point, I bought my own Bible and began to read it. In 2011, I was baptized and continued to grow in the Lord.

A few years later, we moved from western Washington to eastern Washington. We prayed and listened for several weeks once we settled into our new home. After a few weeks, God led us to an amazing church. I continued to grow as I became an active member of the church. Eager to learn, I took on several roles as a Ministry Leader, Bible Study Leader, and Mentor for other small group leaders. I attended church training regularly as I had a passion for ministry. I wanted to learn, grow, and serve. At the time, I was unable to afford Bible College as my wife was attending college so I did not think it would work.

Minister of the Word Calling and Study at CLI

Then, a close friend asked if I would officiate his wedding. I was honored, but I would have to think about it. I researched and prayed about it. However, I did not want to just pay a fee online to automatically get an ordination in return. I wanted it to mean something, and I also wanted to be prepared for their special occasion. That is when I found the Christian Leaders Institute. I shouted, “Thank You, God!”

I am truly blessed for this opportunity. Further, I accepted my friend’s request and am so grateful for CLI. I am going to take every class possible and pursue a degree. It is my dream to serve as a Minister of the Word. God is Good!