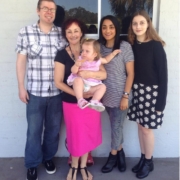 In December of 2005, I had a neurological failure which resulted in multiple organ failure. My liver, pancreas, and spleen stopped functioning normally, and I had several minor heart attacks and seizures. I lost mobility due to nerve damage in my right leg and gained a sporadic tremor in my hands. I was in and out of the hospital for the next four years. My marriage broke down resulting in divorce. My wife at the time could not handle the lifestyle change and extreme physical transformation and pressure. I remember passing at one point at the hospital. I’ve since read many people’s near-death experiences. For me, there was nothingness. I knew where I was, and I knew that the life I had led up to that point had brought me there.

By March 15, 2009, my health had declined to a point where the doctors said, “There’s no easy way to say this, you have three years to live. You need to get your affairs sorted out.” After that, they discharged me.

This news put everything into a new perspective for me. What was it that I wanted to do with the rest of my life? I left Lismore and moved to Grafton. I spent the next few months learning to walk again by first picking a coin up off the floor. Then, I began walking to a corner store 50 meters away. After doing that for a bit, I purchased a bike and started to ride to the corner store. It was difficult as I also had middle ear damage which gave me constant vertigo (the sensation of spinning). During this time, I also established a computer game company, working as a freelance programmer.

Once I was able to ride a bike to the corner store, I purchased a car. Soon, I began driving around Australia. Financially, I was able to work wherever there was an internet connection. So, usually a day or two at a time, I worked. The rest of the time I spent sightseeing and searching. This journey took me a year and a half. It was on this journey that my life’s purpose became clear to me. I had a Bible with me, one I received at birth. As my trip was coming to a close, I thought, “What is next? What legacy am I leaving behind?” I had lost everything and was homeless, living in my car.

Shortly after, I rushed back for the birth of my nephew. I visited my parents and needed somewhere to stay. So, I drove through Kingscliff and saw a room for rent. I rented the place and moved in that same day. The following day, I went to the local cafe to see if there was an art course. They didn’t have one, but there was one in the nearby town of Murwillumbah, and I could start the next day.

It is there that I met my wife, Marija. A few weeks later, we began dating on the condition that I go to church. Previously, I had a negative experience with the church. After all, they are filled with imperfect people. However, it was there that I surrendered the remainder of my life to God.

Fast forward a year, Marija and I were married. Then, nine months later, we had our daughter Belle. I received water baptism at this time. When I rose out of the water, I saw the world with a new perception. It was after this baptism that my life transformed. I can only describe it as a rollercoaster adventure. Even my art instantly changed, my work took on a more in-depth exploration. There was a yearning in the core of my being I expressed through my art.

After we relocated to Armidale from Kingscliff, I felt the call to take courses at a Bible college. I began my free Bible college studies with Christian Leaders Institute in 2018 and completed the certificate course later that year. This period was spent dedicating most available time to Bible study. I was able to spend time meditating on the free Bible college studies I took. I genuinely felt my mind and heart changing. It felt as though my mind was being rewired for God’s purpose in my life. I began to process my past. I felt a new appreciation and gratitude for my present circumstance. God has blessed me with my wife and our children, my family, and our new church family.