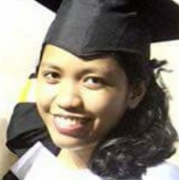 Ednalyn Lebrino – “There are a lot of poor people, the streets are dirty and a lot of slum area”. These are the answers I got from an Iranian Muslim Dentistry Student when I asked her regarding her impression on my country. I was grieved. She added that the Philippines is the only Christian country in Asia. Another bullet shot straight to my chest.

Many Filipinos blame the corrupt politicians for the dirty image we impress upon the foreigners. But the real problem is-our moral bankruptcy.

Though there are a lot of religions in the country: Roman Catholic, Iglesia ni Cristo (Church of Christ), Islam, Buddhism, ” Dating Daan” and sects like Rizalistas and counting, ministries are greatly needed due to the great number of people who are blinded by the world and living in the darkness.no

I, Ednalyn Lebrino, was in that same darkness before. Born as a second child, I lost my father at an early age. After one week, our house was burned in a residential fire. Relatives helped us to start again from scratch by giving us monetary help and temporary lodging. Being the middle child, I was often neglected and less-loved. When I started school, I was bullied by my classmates because I was an orphan.I tried to fight back resulting a numerous streets fights. I blamed and hated God for all the miseries. I cried every night to sleep and tried to commit suicide several times until I reached teenage years but often fail. During High School, I focused on studying well even getting high honors. But still, I am depressed. In college, I learned how to drink alcohol, skipped classes and often times involved in numerous heated arguments with my classmates. I also failed my major subject due to my computer games addiction. My soul was never at ease with what I was doing with my life. Thinking of death was my only comfort not until Jesus seeked me. A high school acquaintance invited me to a Bible Study. At first I hesitated but because I wanted to get away from home for a meanwhile, I went. There were series of singing and talking which I was not accustomed to. Then, the moment of truth. The woman shared with me the gospel and asked me if I want Jesus in my life. The gospel sounds great and I am dying for peace so I said yes. True enough, I found Peace. Now, I am an active member of an evangelical church and a volunteer in the Kid’s church.

Living the life Jesus has given me is a gift. This gift is meant to be shared. After gaining wisdom about His faithfulness, I was burdened by God to do ministry to help other people like me who was living in darkness to find the light. It is my deepest desire to share this hope that I have.

This is the same hope the people needs. In Laperal, (the slum area I came from before I was adopted by my Aunt) I saw a lot of teenagers who got pregnant as early as 14. Prostitution and theft are normal things for them. Gambling and drugs are there way of life. My heart ached for them. Only Jesus can lift up their burden. His gospel is the only thing that could destroy the leash of Satan over them.

I was serving in a ministry before in that area and faced a lot of opposition. Some people stoned us and even throw manure at us. Other members of our ministry were even beaten. Still, there are few who stepped up and proclaim Jesus as their Lord and Savior. But our ministry ended last 2014 due to many factors and that includes lack of training.

CLI is so important for me to revive the ministry in Laperal. For me, finding this free scholarship was an answered prayer. I was discouraged to study in a Bible School because of large tuition fee. But now, I am always excited to study online at my own pace. I am only using my android phone but the wisdom I am gaining is vast.

God is faithful and true to His promises. I asked and I received. I pray that I will be fully equipped to do ministry again. Through CLI, God’s kingdom will be proclaimed even in the heart of Satan’s Lair. I am claiming Romans 16:20 “The Lord of Peace will soon crush Satan under your feet”.

THIS EVENT IS OVER CLI Celebration Tour – Phoenix, AZ on Tuesday, January...

A Life of Service to Others
Scroll to top