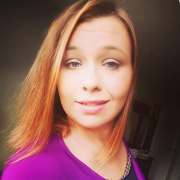 Communicate the Gospel
by Henry Reyenga

My Name is Kassandra Fleckinger. I am from Independence, KY, 15 mins outside from Cincinnati. I am a new believer that found my way back to the Lord. Growing up, I was raised as Roman Catholic in Ohio. There was no relationship established in the church. It was just the same old monotonous task; get up early, go to church, wait for the priest to sprinkle holy water on you, and then run off to Sunday Bible school. That all came to a halt when my parents decided to get a divorce. Obviously, this caused division and my mom packed my 2 brothers and me up and moved back to Kentucky. We had no choice but to move back with family.

Moving back to Kentucky, started a new chapter of my life. It was not a very good start. Upon moving back, there was sexual abuse that happened to me at the age of 10. This occurred for quite some time. I eventually told my mother but, to me, the damage was already done. I had question God’s motives. Time went on, and I became and very angry teenager. The more time passed, the more destructive I became. Suicidal thoughts became a daily thing, self-mutilation let me feel something, and blaspheming God made me so proud. I became a part of the dark world listening to heavy metal and using drugs and alcohol daily. This went on pretty heavy until I had my first child. It slowed down but did not stop. I was always looking for something to fill that void.

In February 2014, my beliefs started to change, only because I was starting to experience bad, supernatural things that are not of this world. Now, before this, I didn’t believe in angels or demons. Things started happening in my house to where my son would say he would see a man and other beings. Then I started to get attacked. Eventually, this broke me down so much and made me physically ill and weak. So I decided to get an exorcism done to my house, but not by a priest, I was far too afraid to go to a church and ask for help. So, I got someone that said they spiritually cleanse houses. I agreed to this, being uninformed to what could happen. I eventually saw this being before this exorcism happened. I was scared to the point where I asked a higher being for help, although I didn’t know who I was praying to at the time. The exorcism happened, and the malevolent presence left the house. There was still something wrong within myself. I felt as if I had no soul. I didn’t know who I was.

Then two days later my gut started telling me to go to church. I shrugged it off, but this voice was very persistent. So the next morning I woke up to feed the baby. It was Sunday, I was watching tv and I happened to land on a famous televangelist. He said, “if something is telling you to go do something, then that is God telling you to do it”. I was confident that message was for me, so I hurried up and got dressed and off to church I went. I went to the church up the street. That sermon ended up being exactly what I needed to hear, and I know God was speaking to me that day. The sermon was about being put under pressure by the unseen things of this world. Only God could deliver that message at that time. It was perfect. That day, April 27, 2014, the presence of the Holy Spirit over flooded my soul, and I gave my life to the Lord. I have not been the same. I have experienced my hardest trials since being saved. From 3 days to being homeless to my 16-month old daughter being diagnosed with cancer. God is a good God, and He has brought me through the storm and made me stand stronger each time.

Now from my testimony to where I am today. I have decided that I want to pursue further my calling. God is calling me to ministry. He wants me to, of course, spread the good news, but also help with the process of reconciliation with God. There are a lot of angry people out there, and they don’t know the true Jesus, they only know religiousness from legalistic Christians, and they view Him through the actions of those people. God wants me to show those people what real Christians are and show them what relationship is all about. It terrified me at first because I know exactly what these people are thinking and how angry they are. It only makes sense God wants me to go to this area of ministry. Knowing God is with me, and that He will use me as a vessel, I have jumped on board.

I have shared the things God has shared with me to my church family. They are extremely supportive and are encouraging me to keep on this path I am on. God led me to CLI specifically. I have checked out a lot of Bible schools, but I was always led back to CLI. I don’t want to go through another Bible school when the Lord has distinctively told me this is where I need to learn everything for my ministry. The Lord revealed that this had good, sound teaching that I can trust. From the classes so far, I have learned so much. I want to continue this. If God were telling me something else, then I would not be able to pursue this. I want what God wants for my life. That is my only desire. A scholarship would very much help me pursue the training I need for my ministry, whether it be in the church, on the street, at my work, or even in my home. The most important objective to get a scholarship for CLI is to be equipped with the info I need to  to those who do know Jesus or do not their identity in Him. My heart is to show people the truth, the way, and the life! I want to help people discover who they were truly meant to be. With the more knowledge, I gain, I can help people pull their gold out from among their dirt. From there Jesus could show them their created value. I will accomplish this task regardless, but CLI would greatly help me accomplish this goal more quickly.

Are you called to communicate the gospel in your community?  Will you join this ministry training community? Where will God take you? Meet us on Facebook to read more stories.