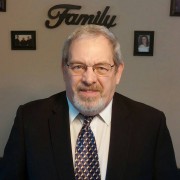 My name is Harvey Fry. I grew up in central Pennsylvania in the USA in a church attending family. After high school, I joined the Marines. Upon my return, I worked as a forklift driver at a warehouse. One of my coworkers had a strong relationship with Christ and witnessed to me. In 1979, his words and God finally got through and I became a born-again Christian. I started attending a local church on my Christian leaders journey. This is where I met my wife of 30 years, Patti, and we have three children.

In February 1994 during a Sunday evening church service, I responded to an altar time and God spoke to my heart calling me into ministry. In 1997, I took early retirement from the warehouse to pursue my ministry calling of being a pastor on my Christian leaders journey. In September 2002, I was elected Pastor of my first (and thus far) only church. In the summer of 2008, I felt God had other plans for me and my family so, after five and a half years of ministry, I resigned my pastoral position. Though guest speaking at other churches, I haven’t accepted any full-time pastorships for 8 years and thought that some new learning and further education would be the next step before returning to the ministry of my calling.

Starting in 1984, I have participated in numerous missions trips to various countries outside of the United States as well as several youth work camps around the United States. Over the years on my Christian leaders journey, I have found myself back in warehouses working to provide for my family, which is where I am at the present time. The calling on my heart for full-time ministry in a pastoral setting is still the core of my desires, and hopefully, the Christian Leaders Institute Basics Certificate will assist that dream. The ease of working and learning online when there are no nearby Christian college campuses really supported my decision in choosing Christian Leaders Institute.

My Journey – My Chaplain Calling
Scroll to top