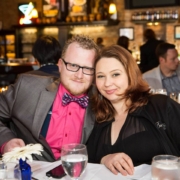 Hello, I am Teri Geer from Kalamazoo, Michigan, USA. I have been married to my best friend Brock for 10 years. We own a ballroom dancing studio and are called to dance ministry. We have two adopted children, age 17 and 14, and two biological children, age 3 and 5. I have an Associate’s degree in business and am a certified Ballroom Dance Teacher. With being called to dance ministry, I am studying at the Christian Leaders Institute (Learn more about online Bible courses, Click Here).

I grew up in a non-Christian home. My mother was a drug addict, and my father was an alcoholic. I had two much older half-sisters of the same age but two different mothers and a 3-year older full brother. Seeing my older siblings struggle with drugs and watching my brother put in shackles and shipped off to prison profoundly affected my childhood. I remember this overwhelming feeling of wanting to get out.

When I was 12, I went to a church with a family friend and decided to do an introductory class. On the first day I was to attend that class, my mother tried to kill herself. I remember the screams of pain coming from her bedroom. She had written a note and taken a bottle of pills the night before. My father found the note and decided to let her die. When I realized what was happening, my father screamed at me and said it was all my fault and just to let her die. I ran to a friend’s home and called 911.

The family friend that I attended church with came to take me to the introductory class. I said I did not want to go. I wanted to go to the hospital to see my mom. But I was made to go to the class anyways. As I sat in that class, I decided I would never set foot in a church again, but as you will see, God had different plans.

At the age of 16, I started dating my husband. He became my rock, and I became his. For the first time in both our lives, we felt hope for a future. We got a place together after my first year of college and started planning a wedding. Well, Brock proposed, and I started planning the wedding. I got a dress and found a venue. Everything was going great.

I decided to stay, hoping his feeling would pass and we would start planning our wedding soon. We moved into a home that Brock got a loan for and started building our lives, not married. As the years ticked on, I started to become a bitter and resentful woman. I would seize any opportunity to tell others of the man that called off our wedding and still would not marry me after six years. Although I was not nice, I thought our relationship was still great.

Then one day, Brock said he could not stand me and wanted to break up. I was devastated. He was my rock. I found myself without anywhere to live and nowhere to go. I decided to stay at “our” home until I could find another place. Then, I began to drink excessively and sank into a deep depression. I thought drunk people did things they wanted to do, but I did things I did not want to. Soon, I was a person I did not like, and I did not know how to stop.

Slowly, Brock and I started to heal our relationship little by little. Yet, deep scars were still there. Finally, we married. Two months after the wedding, our two nieces moved in since their parents lost all parental rights. We adopted our two nieces and became instant parents to an 8 and 5-year-old.

A little after this time, odd things started to happen. One day, Christian music began playing in my car. I would get in my car and think this is dumb and change the station. Then one morning, I was lying in bed, and my alarm began to play a song called “I am Redeemed.” It was very odd as my alarm does not play music but beeps.

At that moment, something began to change in me. I got a Bible and began to read it. I started in the New Testament. The first thing I noticed was I did not know what many of the words meant. Then I learned that there are different translations. I would sit on my bed with multiple Bibles around me, learning about who Jesus is. I learned he was and is not at all what I thought. God started stirring my husband around the same time. So, we started to go to a church. I tried to learn to be a good Christina, but I still had depression. I remember reading Romans 7:19, “For I do not do the good I want to do, but the evil I do not want to do—this I keep on doing.” I prayed that God would not give up on me.

Then one morning, I woke up and just wanted to die. So, 7 years ago, I got in my car and seriously debated running into a tree. I stopped at a store, and when I came out, there was a CD of a book called 30 Minutes in Heaven sitting on my driver’s seat. As I listened to the book in my car, I cried and cried. I knew that God was real and that He loved me. I could not keep thinking all the things that were happening to me were just a coincidence.

At the end of that book, there was a time to give your life to Jesus. Alone in my room, I fully surrendered my heart to Jesus and have never been the same. I no longer have any depression or drinking issues. I am complete and completely changed. My life has hope and a purpose. Jesus is my love and my everything. I still face troubles, but now I have the Holy Spirit as my rock.

A few years back, I was at a local church and heard Lisa Bevere preach. At the time, I did know women could even do such a thing. Then just before the woman took the stage, I felt the Holy Spirt whisper, “You will do this.” I thought, “Hmm, what will I do?” Then I saw a woman preach.

I am not sure what my next step will be or the complete picture of what God is calling me to. But, I know part of it is I am called to Dance Ministry, where I help others know Christ better through dance. I wrote a marriage curriculum that my husband and I teach. In this group series, couples are introduced to biblical principles through learning to dance together. Our intention with the dance ministry program is to serve the body of Christ through unifying marriages using dance.

I started dancing when I was 13 and was not a natural. Most would have called me a “Klutz.” However, through hard work and determination, I began to excel. As a teenager, I was awarded the title of Miss Teen Dance. I started teaching others to pay for my dancing lessons. In teaching, I found a love for helping people realize their true potential and sharing the benefit of dance. I have enjoyed competing in both professional and pro-am dance events. In 2013, I was honored as one of the top ten ballroom dance teachers in the United States.

I am excited that God has called me to dance ministry and further kingdom service!

Called to Church Planting and Study at CLI
Scroll to top