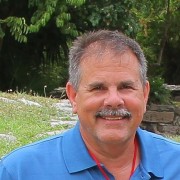 God is at work in the state of California! Revival leaders like Donald Fontana are sending in stories every day, telling how God has called them. This generation of California revival leaders is reaching all ages and stations of life for Jesus.

As one of God’s called California revival leaders, Donald really feels the pull for those who are wandering away. His ministry dream is to make sure that everyone knows they are never too far for God’s love to reach them.

Hello, my name is Donald Fontana, a 61 year old husband and father of three with three grandchildren. My wife and I live in a small community south of Los Angeles California, USA. My oldest daughter lives in Texas, USA with our three grandchildren and our youngest son is in his second year of college studying nursing.

I was not brought up in a religious environment, in fact Easter was simply about a bunny and Christmas was about gift giving without an understanding of why. I always had a belief in God but always felt He was disconnected and far away. I came to know the Lord around the age of 27 via a co-worker while working for McDonald Douglas Aircraft. The co-workers name was Tommy and unfortunately, I cannot recall his last name and have lost all contact with him.

I was a Christian for a couple of months when I married to my first wife. I struggled to keep my faith as she was not a believer. After two and a half years I lost my job and shortly after that we divorced. I soon lost my faith and it wouldn’t be until 25 years later that the Lord called His prodigal son back. A couple of years after the divorce of my first wife I married again. My wife is Catholic, but at the time of our marriage she was not practicing her faith. It wasn’t until years later did she return to her Catholic church.

Shortly after our marriage we had a daughter, Jennifer. She is the apple of my eye as they say in the USA. We did everything together and as she reached 8 years old my wife and I decided that we should try for a son and we were blessed with a boy, Donald. It was about 2 years later that our marriage began to have issues. Throughout the next few years, I had become verbally abusive and it had gotten so bad that my wife took the kids and left me. She filed for divorce about a month later.

Although I didn’t know it at the time, God by His mercy and grace had taken hold of me and told me to seek counseling. I read a dozen books on marriage and went to counseling for 6 months, all the while my wife refusing to believe I had seen the truth in what I was doing and was truly changing. Still not believing that God was at work but hoping she would see my progress, just 3 days before our divorce would be finalized she came back with the kids.

Several years passed, and my daughter was now 16. She began arguing with her mother and at times wouldn’t come home until early the next day. Finally it all came to a head when we confronted her on some drug paraphernalia in her bedroom. She admitted to being addicted to crack cocaine. Shortly after that we sent her to Narconon, a drug rehab center that specialized in Cocaine addiction. After 6 months of rehab she came home. At the age of 18, our daughter moved out to be with her future husband in Texas.

Things were going well enough until my son reached the age of 15 where he was diagnosed with lymphoblastic leukemia and had to undergo Chemo for 6 months. It was at this time I sought the counsel of a Christian friend and asked him to pray for my son because “God would listen to him”. I had no expectations that God would listen to me. Just before I went to the hospital to meet with the oncology team and hear the prognosis of recovery, I knelt by my bed and asked God to spare my son. Not feeling as though God heard me I left for the hospital. However as I was driving to the hospital three white doves flew down directly in front of my car and lead directly in front of me for several miles. I had no doubt that God had sent these three doves as a sign that he heard me and my son would recover. Needless to say, I repented of my past sins and returned to a relationship with my savior and my God. My son is now 22 and completely cured of his leukemia.

I have been following the Lord for ever since this took place and serve every Sunday at my local church as an usher. I also participate in a Wednesday evening bible study. My dedication to serving the Lord and knowing Him better is what led me to CLI for a deeper understanding of Him and a greater desire to tell others of God’s merciful love and unending grace even for this long lost prodigal son.

My prayer is that those who have fallen away and are wavering in returning to our Lord because too much time has past or they have done terrible things and can’t believe God still loves them, that they will read my story of redemption and believe in the power of grace.

Are you called as a revival leader? If so, Christian Leaders Institute could be for you. Check out our free, high-quality ministry training by clicking here.