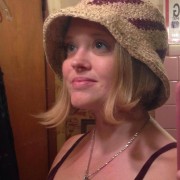 My name is Georgianna Stryker, I am from the United States. I am 29 years old. I am an only child and my parents are separated but remain good friends. I did not grow up in a religious home. My mother believed in God but never pushed anything upon me. I was not baptized as a baby because my father is not religious at all. But don’t worry I’m working on him. My mother always wanted me to make the decision myself. I officially accepted Jesus as my Lord and savior when I was 17.

It might sound silly but I received a Christmas miracle and that was what really made me believe. I had been driving a car to work and to college that was absolutely falling apart. It not only had many cosmetic things wrong with it but also barely functioned. Some the of the malfunctions were quite dangerous. Mechanical issues put me in danger of tires falling off while driving and it had a tendency to stall in the middle of intersections. I had no choice in driving  this car though, I had to get to school and work and it was the only means of transportation in the small town that I lived in.

It was Christmas Day and my boyfriend Shawn and I were visiting at my grandparent’s house for Christmas dinner. After dinner, I went to leave and the car would not start at all. We were suppose to go to my mothers for the rest of Christmas and I was very upset that we were stuck. My uncle Billy came out of the house and saw me struggling with the car. He came and asked me about the car concluding that it was indeed a hunk of junk. He told me that I needed something more reliable for school and he had just the thing.

He literally drove to his house and brought a car back that was used but in beautiful condition. He gave it to me right there on the spot. He said that he had bought it for his daughter but she didn’t like it so I could just have it, no strings attached. I cannot even explain how taken aback I was. I was absolutely blown away by his generosity. I sat in my new car and I realized it wasn’t just my uncle I should thank. It was Christmas after all. I burst into tears and thanked God for this most gracious gift. That was the moment I became a Christian.

I wasn’t baptized until I was 23, I studied for a year or so and then was confirmed into the Episcopal church. For many years I went to an Episcopal church but I have never taken much stock in specific denominations. I believe that what is important is your relationship with God, not what you label yourself as. Now I actually go to almost every church in my area. I go to a different one each week. I like switching it up and seeing how others worship.

On May 19th 2012, Shawn and I got married. We had been together since we were teenagers. He died in a car accident October 30th 2012, only five months later. I became a young widow overnight. My faith was certainly shaken. I wanted nothing more than to be with Shawn and I couldn’t understand for the life of me why God had taken him and left me behind. I prayed to go home to heaven more than anything. The world moved on around me. .As time went on I had a friend draw me out of the abyss. This friend and I became closer and it developed into something more. My faith actually grew during this period and continues to grow today. Shawn’s death actually brought me closer to God in the long run. They do say that we must walk through fire to be refined.

I have wanted to become ordained for a while, but I was reluctant to do it online, because everything I found seemed too easy. Many websites cost a lot of money for what seemed to me to be no more than a piece of paper. I want to reach people and teach people about God. I already preach to my friends and family. I am thinking about starting my own church right out of my home at first. I want to give sermons that young people can relate to. I want to put things in their language so they can understand. I want to dismiss some of the formality and judgments  that scare away many young people today. As I go to my various churches I am usually the youngest person there and one of two or three under fifty. I believe that we need to change our approach or there will a lot of empty churches in the future.

A scholarship to Christian Leaders Institute would help me to become ordained so that I am able to reach the people that I would like to . It would provide me with the proper training and not just a piece of paper. I would not be able to afford to go to a traditional seminary. I already have three college degrees that I was only able to get through financial aid. I have a bachelor’s in English and psychology and an associate’s in psychology and I have yet to be able to work in either field. Since I have already been through college I don’t believe I could get any more aid. This scholarship will enable be to further my religious studies. I am thinking about getting my bachelor’s of divinity as well. This will afford me a Bachelor Of Divinity Opportunity  to become the person that God intended me to be.

Obtaining an M.Div – CLI can Help!
Scroll to top