“Ministry in the United States is relatively easy. The area of east Liverpool, Ohio, in which i live, is currently and predominantly Christian. There are, unfortunately, still people who are unbelievers or have “hardened their hearts” to the lord. Maybe they just haven’t seen what its like to live as a true christian.

“As for my own faith, I grew up without any faith or religious views. I was raised around anger, hatred, sin, and things of the world. I also grew to know these things. I was full of anger and hatred for everything, even fellowship with other people. Then, sometime in the early nineties, I met my wife Susan. She grew up to know Jesus and the word of God.

“One sunday, she asked me to join her for church services, but I made excuses not to go. That afternoon, while susan was at church, I stopped at a small roadside stand to get a bite to eat. I sat at the counter and placed my order. Shortly after, an older gentleman came in and sat right next to me. He could have sat anywhere, but he chose to sit next to me. This made me angry, so I got in this man’s face and called him some severe obscenities hoping for a fight. As I stood there waiting for a reply, he looked at me and said, “your parents (he named them personally) should have brought you up in a better environment. It’s never too late to receive Jesus.” He dropped a few dollars on the counter and went out the door. I was flabbergasted because I had never seen this man before in my life and never had again. After a few seconds, I ran out the door after the man because I had alot of questions to ask. The man was nowhere to be seen. The street was empty. In shock and confusion, I drove to church where the congregation was just getting out of worship. I started asking questions, and the pastor put an arm around my shoulder and answered the questions that I so desperately needed.” 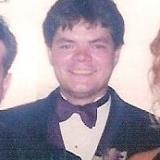 “My ministry dream is for every head to bow down and every person to worship the Lord and live godly lives. I would like to further my own knowledge and grow in the Lord.

“I would appreciate prayers that my ministerial skills be used to please the Lord. Also pray that I glorify the Father to spread the good news of the gospel and advance in my own knowledge.”

Lonnie Cooper grew up in a home that taught him a bad model for life. He had no interest in Christ, but now Lonnie Cooper is living proof that God can reach any heart! Lonnie Cooper has turned his anger-driven, bitter life around through the grace and power of God. Now he wants to help others do the same. A scholarship at CLI is just what Lonnie Cooper needs to accomplish his ministry calling!