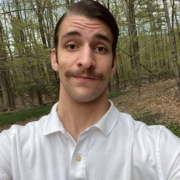 My name is Morgan Young, and I am receiving formal Christian education at the Christian Leaders Institute to prepare for my ministry calling (Learn more about online Bible classes, Click Here). This is the story of how I spent years ignoring my calling to the ministry before surrendering.

From the United States, I was born in my own house outside of Augusta, Maine. Raised in the Assembly of God church, I accepted Jesus into my heart at 4. I also attended a Lutheran-Episcopal preschool. I made some of my earliest memories at these places.

When I was 7, I was diagnosed with Crohn’s disease. I spent the next decade taking various medications and treatments. However, every time I started something new, my body produced antibodies against it. So then, I’d need a different prescription. For this reason, I was never able to take any particular medication for more than eighteen months or so.

When I was 17, I went to Whited Bible Camp in Bridgewater, Maine, with a few of my friends from church. During the worship service on the first night, I wanted somebody to pray for me, but no one did. So I thought maybe this wasn’t the time I was meant to be healed.

But then my best friend came to me, and said God told him this was the last day I would suffer with this disease. So, I closed my eyes and lifted my hands so he could pray for me. Instead of laying his hands on me, he punched me in the stomach so hard I flew back and hit the floor. But I wasn’t hurt. I started praising God because I knew at that point I was healed. Someone who witnessed the event later told me he saw a light enter me and a darkness leave.

After that service, the youth pastor asked if any among us felt called to the ministry. If so, we were to come up to be prayed for. I knew I had to testify of this major turning point in my life to the world, so I did. Weeks or possibly months later, while at church, someone prophesied about me and my calling to the ministry. I wish I remembered his exact words, because this was the closest I ever came to hearing God speak to me personally and audibly. To sum it up, God indeed was calling me to the ministry and confirming this to me. So, I applied to the Pastoral Leadership program at Liberty University.

The Servant Who Didn’t Listen

However, I never participated in that program. For some reason, I grew disinterested in the ministry by the end of high school. So instead, I joined the Army Reserves at age 19 and became a Motor Transport Operator. When I finished training, I did Liberty’s Politics & Policy program instead, doing poorly in many of my courses.

I also tried starting a business on the side. So, I blew half of my Army bonus on stocks and crypto right before the COVID crash of 2020 and the other half on a failed Shopify store. Next, I tried a career in inbound sales and insurance sales, yielding next to no fruit. Penniless, unemployed, and back living with my parents, I spent many of my nights angrily crying myself to sleep, contemplating all the time and money I’d wasted.

I wanted a job I could be passionate about, so I looked for one. I decided I wanted to do something Christ-centered since that was something I was passionate about. But how could I get the training for a job like that with no money?

That’s when I found the Christian Leaders Institute. I may have spent over $20,000 on college courses, but I realize now it doesn’t matter. I never needed to spend a dime to get a formal Christian education. Now, I have all the resources I need right here, and I have a supportive community of other leaders who share my calling.

My goal is to minister via radio (possibly television), and then plant a church when I make enough money to do so. I don’t think it will be easy, but it’s a lot easier to heed the call of your master like Samuel did than to be the servant who didn’t listen.