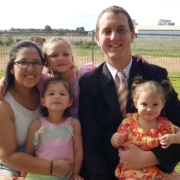 My name is Joshua McLean. Born on the east coast of Australia near Sydney, when I was 6, I moved to Dubbo in New South Wales. It is a 5-hour drive west of Sydney. Currently, I am studying at the Christian Leaders Institute for a deeper relationship with God and a strong Biblical foundation (Learn more about online Bible courses, Click Here).

I grew up in a “Christian” home. We went to church and prayed at mealtimes and had a home group. However, my family didn’t really embrace the Christian walk. There was always a gap between their hearts and God. I went to an independent Christian school and had a great foundation for understanding the Word and its meaning. However, I had no connection to God and a minimal connection to my parents.

When I was a teenager, I began displaying some connection-seeking behavior. I would do ANYTHING to feel connected to people. This included drinking alcohol, chasing girls, property damage, getting into fights, playing up at school and home. I also became addicted to pornography. These behaviors lasted from when I was about 14 until just after my 18th birthday.

One Friday night, I remember challenging a friend to drink a whole carton of beer between us. It didn’t take long before I was incoherent and couldn’t walk. I went to my friend’s girlfriend’s bed and passed out. The next thing I knew was my friend standing over me. He had his hand in my mouth, trying to clear my airways as I had been choking on my own vomit. He saved my life.

It was at this moment I realized I was at rock bottom and had almost died there. So, I decided to go back to church and the youth group. However, when I turned up at the youth group, the youth pastor came and turned me away. He said he knew what I had been up to, and they didn’t want me influencing anyone there.

Changes in My Life

Then, I started my first full-time job looking after people with disabilities. I met a beautiful woman who also worked there. We began to connect and agreed to keep things professional to start with and see where it went. Eventually, she invited me to her church, a Pentecostal church in my town. It was a young congregation and had a few people I knew. As soon as I walked in the doors, I knew I was home.

It started a renewed, deeper relationship with God, one where I was walking WITH Him. I dedicated my life to God and got connected in a group of similar-aged men. There I learned more about WHO God is and how much He loves us.

Soon after that, I began to help at the youth group as I am passionate about kids and teens. I was then appointed a leader at the youth group. Also, I led a small group for teenage boys where we studied the Bible, ate a lot of food, and played rough games.

The woman from work and I started dating. Two years later, we got engaged and then married soon after. We began a beautiful life together and now have three beautiful daughters and a cat.

Eventually, I became the assistant youth pastor. A year later, I became the youth pastor with my wife by my side. We ran several regional camps, and I became a regular preacher at church. Also, other churches and camps asked me to be a guest speaker. My wife and I also served on the church eldership for two years, leading the church’s spiritual development with four other couples and the pastors.

Then, my past trauma and lack of connection caught up with me. My mental health deteriorated significantly, leading me to step down from all church-related activities to focus on my mental health, marriage, children, and job. I worked in child protection – investigating allegations of sexual abuse and supporting families through it. I even put my relationship with God on hold for a short time. However, I decided to refocus my life on the Lord recently. This focus led to me studying at the Christian Leaders Institute to develop a deeper relationship with God my Father in Heaven.

Currently, my state is in lockdown, and I have had plenty of time to think and be alone with my thoughts. However, I frequently think of the verse: “Be still and know I am God.” It always reminds me that I can always be too busy to live and remember the important things.

My life is on its way up, and I have much hope and excitement for what God has planned for my future. I am just focusing now on the “basics” and enjoying every moment of it.