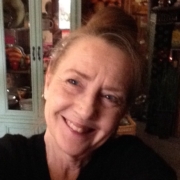 Called to Serve in Ministry

Hello! My name is Kelly Kuresh (Litle). I live with my cat Tatum in a rustic cabin on Vancouver Island, BC, Canada. I have a Bachelor of Fine Arts in Theatre and a Diploma in Interior Design specializing in kitchens and baths. Further, I am also an artist and a writer nearing the completion of my first work of fiction. I am called to serve in ministry, so I study at the Christian Leaders Institute (Learn more about online free Bible courses, Click Here).

I was born in the mid-sixties, a time of great cultural upheaval and the rise of music designed to destroy souls. My parents split when I was young and my step-father had disdain for anything to do with God and religion. Apparently, I received Catholic baptism but knew nothing of God or scripture.

When I was ten, I had what I can only describe in retrospect as a breakdown. It started one night while in bed staring at the stars. Earlier that day, we learned that space was infinite – on and on and on. I tried to wrap my head around that as I thought about my own mortality. Was death just this black infinity forever? Or were you stuck in one reality forever?

Both of these ideas terrified me, and it began to dawn on me that death was out of my control. I was going to die. I had such a panic/anxiety attack that I was gasping for breath. However, it sounded like I was laughing. My mother opened the door to my room and told me to knock it off and go to sleep. I knew then that I would never be able to articulate my fears to my parents. Frankly, I knew they wouldn’t have the answers.

My Crisis of Faith

I went through this terror on and off for the next five years until I began babysitting for our local dentist and his wife. They were devout evangelists. I can’t recall how I brought the subject of my fears up to the dentist’s wife. But, I know I must have because she sat down with me one afternoon. She read and marked passages in my Mom’s Bible (that I have to this day). She gave me a great deal of peace. They moved away shortly after that, and being sixteen on a farm, my scriptural education stopped there for the time being.

In my twenties, I attended regular mass at the Catholic Church. I attended for several years at several churches as I moved West. The last mass I attended was at the Cathedral in Victoria. It is stunning and impressive and elaborate. As the priest, et al, began their procession all decked out doing their ritual, I thought, “what would Jesus think of this? Or what if He was just a really good talker when he lived but we got it all wrong, and it’s all come to this? Would he laugh?” It was a crisis of faith.

The churches I attended didn’t seem too heavy on scripture. So, I never heard the dangers of divination. Shortly after I stopped going to Mass, a relative had my astrological chart read and sent to me in a report. I was ripe at that point for ‘new age’ ideas that were being espoused and normalized everywhere. This same relative gave me a set of tarot cards, and I looked at them as a conduit to God. I never stopped believing in God and had no idea the sin I was committing. In reality, I wanted to be in control and I took from the tree of knowledge. I did this for many years and felt I was bringing hope and peace to those who sought my help.

In mid-2000, I began to see the depth and scope of the spiritual trouble we were in. It completely changed my perspective. I used divination to navigate my life and knew many people who consulted similar spiritual tools. In the last ten years, I suffered some major losses and tragedies and sought answers through cards. Meanwhile, I began to see that Satan and those who worship him were getting bolder and bolder. It seemed to me that if Satan is as the Bible says, then Christ must be too.

When the world turned upside down in 2020, I felt a compulsion to read the book of Revelation in the Bible. I found a Youtube channel called Good Fight Ministries which exposes the evil within music, movies, etc. They brought up verses warning against using tools of divination and pointed out that good intentions didn’t matter as it was strictly against scripture. At that moment, I repented and cast them aside. I went through my house and removed all books and objects associated with new-age practices. Then, I asked Jesus to forgive me.

Ironically, the same year I had my anxiety crisis our class received Gideon Bibles. Through all my many moves and years, I have always had it with me. Inside the front cover, on a page saying ‘presented to,’ is my ten-year-old scrawl saying Kelly Kuresh, Grade 5, October 10, 1975. On the back cover was another place to sign titled ‘My Decision to Receive Christ As My Saviour.’ This was unsigned all these years. So on October 10, 2020 – exactly forty-five years later – I signed my little childhood Bible. It said, “Confessing to God that I am a sinner, and believing that the Lord Jesus Christ died for my sins on the cross and was raised for my justification. I do now receive and confess Him as my personal Saviour.”

Called to Serve in Ministry and Finding CLI

Mostly unemployed since March of 2020, the Lord always provides what I need. There is much comfort and gratitude in that. I prayed to ask how I can best serve and what steps I should take. God answered that I am called to serve in Ministry. I knew I wanted and needed training, so I immediately began to research the path to Christian Ministry. I couldn’t believe it (or could I?) when I found CLI. CLI offered an extensive amount of training, and I enrolled with them that very day. I don’t have any preconceived ideas of what being called to serve in Ministry looks like specifically for me yet. However, I’m willing to get direction from the Lord. I joyfully look forward to living a life in Christ! Blessings!

Step 1 – Register for a free study account that automatically enrolls you in the Christian Leaders Getting Started Course Part 1 &2.

After you register, you will automatically be enrolled in the “getting started” course. You will locate the course at your “home” button when logged in. Scroll down to find the Christian Leaders Getting Started Course Part 1 &2 Link. Click the link and open the course.

Step 2 – Complete Part 1 of this course, and then you are allowed to enroll in mini-courses or regular courses.